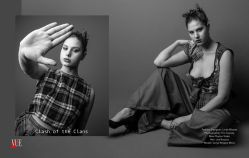 Clash of the Clans

British fashion designer Linda Blissett has derived inspiration for this collection from the Jacobite rebellion and the Battle of Culloden.

The collection takes the heather and earth muted tones of the battlefield at Culloden, using cut up and used upcycled pieces of tartan fabrics, tweeds and old kilts which are mixed up and sewed together to represent the coming together of the clans that fought at the Battle of Culloden  (some of whom fought against each other) and aftermath of the battle when tartan was banned. Linda has also incorporated and interwoven real heather, pheasant feathers and ribbons.

For the structure of the the fabrics, she looked to scottish Artist and architect Rennie Macintosh and his wife Margaret MacDonald for the structural works they created.

The clan system was abolished after the battle of Culloden in 1746. This is represented by the mixture of tartans together and the loss of the clans at the time.
Tartan was later to be popularised by King George the IV And Queen Victoria to the modernity of tartan today.

(many other locations possible depending on requirements)